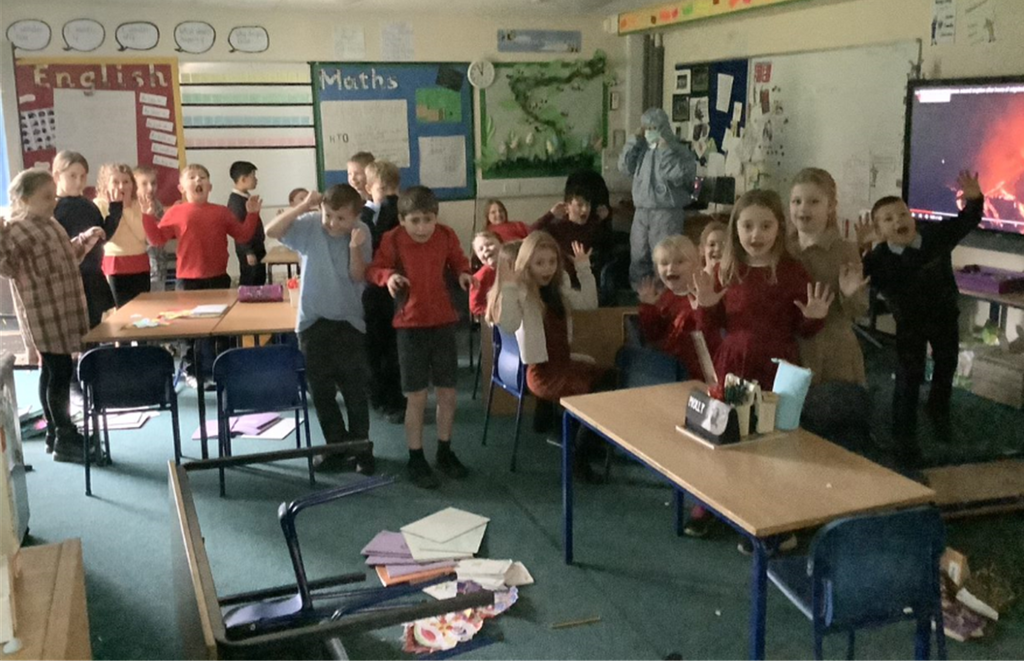 On Monday 10th January 2022, year 3 and 4 were doing volcano themed activities for volcano day. One of the activities involved using pastels to create volcano art. We did a volcano eruption to see what an eruption looks like, one eruption showed the lava slowly moving down the volcano and the second eruption shot straight up in the air! We created our own emergency kit in case a volcano erupted, in it was food, water, warm clothes and sturdy boots. Then it happened, the teachers were all in blue suits and masks, the classroom was made to look as if there had been a volcano eruption. The tables and chairs were  upturned and there was hazard tape everywhere. There was tension in the air when the volcano erupted. We felt excited and the whole thing felt very real. So that was volcano day, WOW! By Xander K and Milla L Year 4

Today after break time year 3 returned to their classroom and saw that the tables and chairs were knocked over. This happened because a volcano erupted. When the children got into their classroom the sound books were knocked over, tables and chairs were upside down. It smelled like a burning smell. I was so excited, the smell was awful, it was a great start to the new topic. By Lexus P Year 3

The quiet village of Brixworth, Northamptonshire was terrified five days ago when a huge volcano erupted and destroyed part of the big school. On Monday morning during playtime a ginormous volcano eruption happened and was found by some young children who were terrified and scared. “What has happened to our classroom?” said 7 year old Jessica P. Some children said it smelt like rotten eggs and mouldy oranges. Everyone saw and heard volcano sounds at that time. What had happened was unbelievable. “What is that awful smell?” said 8 year old Amelia D. “I am terrified” said 7 year old Storey d R. By Jess P Year 3